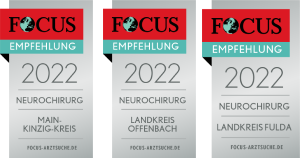 In this video, Dr. Eichler describes the most frequent surgical approach to cervical spine degeneration.

Transscript:
Cervical operations are very elegant operations. Over 98% of all operations on the cervical spine are performed from the front. You make a small cut at the front of the neck and can easily push your trachea and esophagus to the middle. That is, if I press on it here, then I don’t have to go too deep and have already reached the spine. The spinal column is not in the back of the throat, as one might suspect, and as we know from the lumbar spine, but it is in the middle of the neck. In cervical spine operations, it almost doesn’t bleed because almost nothing needs to be cut through, which means that when the skin is open, you can press the cervical soft tissues to the side with your finger and insert a barrier, then you have a perfect view of the spine. When the blocker is in and the spinal column has been exposed, the broken disc is removed, which then allows access to the spinal canal. All nerves are exposed, i. e. both the central spinal cord and the spinal nerves exiting at the side. If this is the case, the empty space between the 2 vortices is filled with another placeholder. For younger patients, a mobile placeholder can be used, such as a disc prosthesis. In older patients, a fixed placeholder will be used to fix the two vertebrae together, a so-called cage.

Dynamic Fusion of the Lumbar Spine